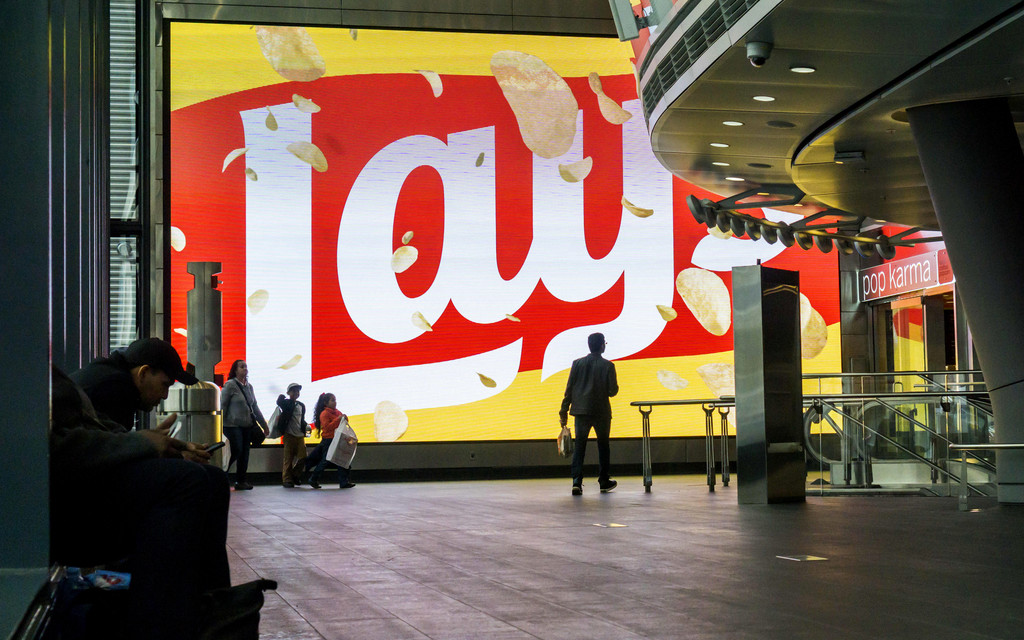 An array of new products at a trade show in Atlanta this fall told the story of two PepsiCos. Anchoring one part of the display was a fiber-filled nut and fruit bar called Init and a sparkling lemonade with real lemon juice called Lemon Lemon.

Nearby sat an assemblage of bright bags of Mac N’ Cheetos, new frozen cheese sticks resembling Cheetos, and Top N Go Doritos, a portable meal designed to be eaten with a fork and high in salt and fat.

Here is a company pulled in two different directions. Chief executive Indra Nooyi has vowed to turn the maker of Fritos, Cheetos, Lay’s and Pepsi into a health juggernaut. But while consumers say they want to eat healthy, often what they really want is chips.

Despite an expanding stable of “good for you’’ brands like Quaker oatmeal, Naked juice and Sabra hummus, PepsiCo Inc. fell behind the goal it made in 2010 to triple revenue from nutritious products to $30 billion this decade. Its new 2025 goal, announced in October, is that sales growth of its nutritious products “will outpace’’ the rest of its portfolio.

Many launches have worked, but many, from True North nuts to midcalorie Pepsi Next to Müller Quaker yogurt, have fizzled. PepsiCo fell behind self-set targets of reducing the average amount of fat and sodium in key global brands by 2020. Sugars added in manufacturing have actually increased, instead of decreased as planned, in PepsiCo’s products.

But buoyed by less-healthy snack brands such as Doritos chips and Cheetos puffs, PepsiCo’s sales and volumes are on the rise and its profit margins have expanded in 15 quarters straight. Its stock price set a record high in July. Ms. Nooyi has revved up performance enough that earlier this year, Nelson Peltz, an activist shareholder who had dogged her for three years, congratulated her and walked away. 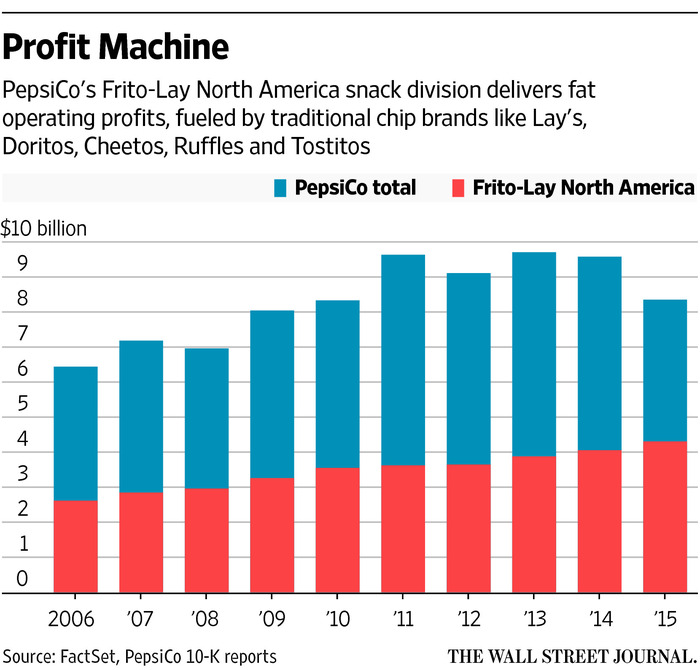 These are hard truths for big food companies. Taste is the biggest factor in a snack purchase, according to 66% of baby boomers and 53% of millennials in a March survey by consultancy Alix Partners. When people get together, “they have snacks like potato chips and pretzels. They don’t all sit around and snack on granola bars,’’ says Norman Deschamps at market researcher Packaged Facts.

Natural and organic foods and beverages are growing fast—23% to $41 billion the past two years in the U.S.—but are still a small slice of the country’s $425 billion in overall sales, according to retail tracker Spins. Such products are often costlier to develop and harder to scale up. There were up to 50,000 products in a typical grocery store by 2013, up from 15,000 in 1991, but a quarter of them sold less than one unit a month, according to Accenture, a global consultancy.

It is a lot easier for a food behemoth like PepsiCo to generate revenue by tweaking just the Lay’s brand of potato chips, the world’s top-selling food brand, than to start from scratch with quinoa or spinach. Boosting Lay’s global share of savory snacks by just a 10th of a percentage point translates into roughly $135 million of additional retail sales, based on Euromonitor International data. Almost two dozen PepsiCo brands earn at least $1 billion in annual retail sales.

The world’s biggest food companies have been trying to ramp up healthier offerings for years, but consumers haven’t given up their love for all things sweet and salty. 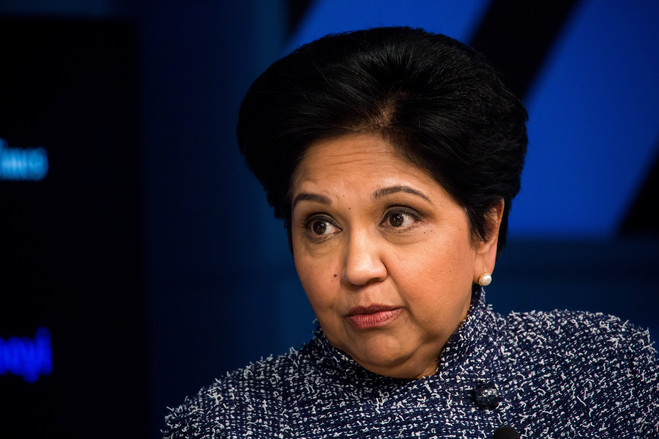 CEO Indra Nooyi, above in November, has cast the company’s development of healthier products as a business opportunity and an ethical imperative. Photo: Michael Nagle/Bloomberg News

Nestlé SA, deep into a big push into healthier food, has warned it will miss its revenue growth target for a fourth straight year. A big reason behind recent woes at General Mills Inc. is weak Yoplait yogurt sales. Campbell Soup Co. blamed a recent sales downturn on execution problems at its fresh-food division after a poor carrot harvest and protein drinks recall.

In October, PepsiCo set new sugar, sodium and fat reduction targets for 2025. It says nutritious products have risen to about 25% of revenue from 20% a few years ago.

Last month it paid slightly more than $200 million to acquire KeVita Inc., a maker of fermented probiotic drinks aimed at helping digestion and immunity. As halftime Super Bowl sponsor this February, PepsiCo is promoting Pepsi Zero Sugar, a diet cola. And it is introducing a version of Lay’s barbecue chips with 50% less sodium.

Successful recent launches include Smartfood Delight, a reduced-fat popcorn; Quaker Real Medleys, portable instant oatmeal with fruit and nuts; and Mountain Dew Kickstart, a caffeinated juice drink with less than half the calories of regular soda. 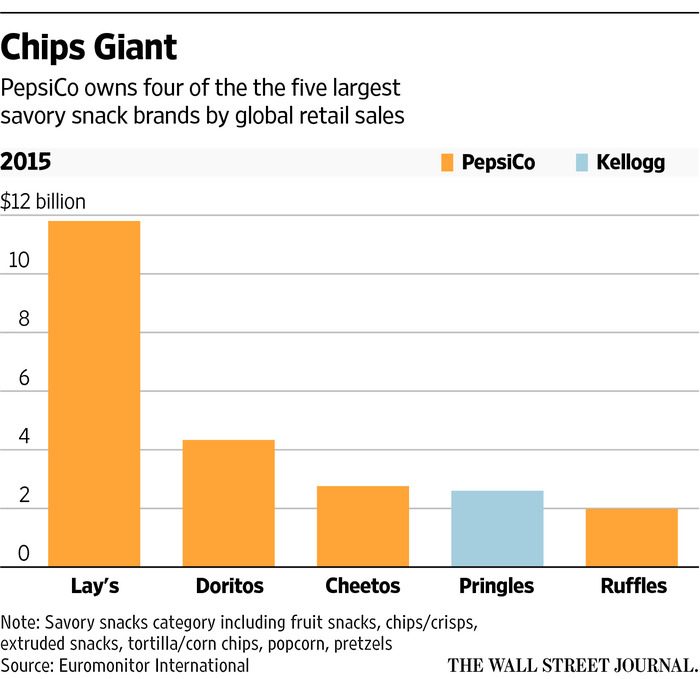 Chief Financial Officer Hugh Johnston declined to compare growth rates or profit margins of PepsiCo’s “good for you” products, which have positive nutrients like grains, fruits, vegetables and protein, with “better for you’’ products, low in sugar, salt and fat, or what it calls “fun for you’’ products such as Cheetos.

Nutritious products, Ms. Nooyi told Wall Street after taking the reins in 2006, represented one of PepsiCo’s “biggest growth opportunities,’’ adding that the company saw “health and wellness as one of those rare opportunities in business when the public good intersects with private interests.’’ The CEO, born and raised in India, has cast the push as an ethical imperative. 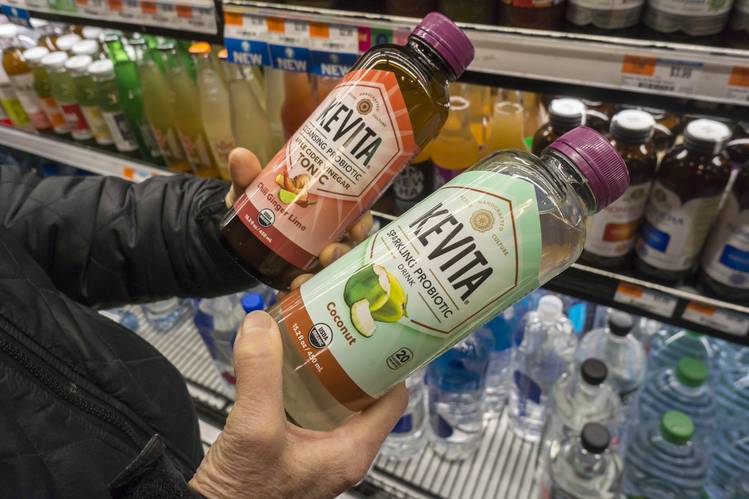 PepsiCo didn’t make Ms. Nooyi available to be interviewed for this article.

She approached Switzerland’s Nestlé about a potential merger but was rejected. Nestlé thought PepsiCo’s dependence on chips and soda would hurt its own effort to become a company that sold healthier foods and beverages.

Ms. Nooyi ramped up R&D spending and dispatched executives to Iceland to research seaweed, India to study Ayurvedic medicine and Africa and the Amazon to learn about ancient grains, berries and plants.

She recruited Mr. Khan, a former Mayo Clinic endocrinologist and R&D chief at Takeda Pharmaceuticals, to employ basic science to solve some of food’s thorniest problems—including sugar, salt and fat, which are cheap ways to make products taste good but are unhealthy in large quantities.

Ms. Nooyi had to cut her profit outlook twice in 2011 and warned again in 2012. Investors accused her of ignoring brands that were “bad for you” but good for shareholders. The performance attracted Mr. Peltz, principal of Trian Fund Management LP, who dismissed the nutrition push as a “distraction” and accumulated stock in a campaign to split up PepsiCo. 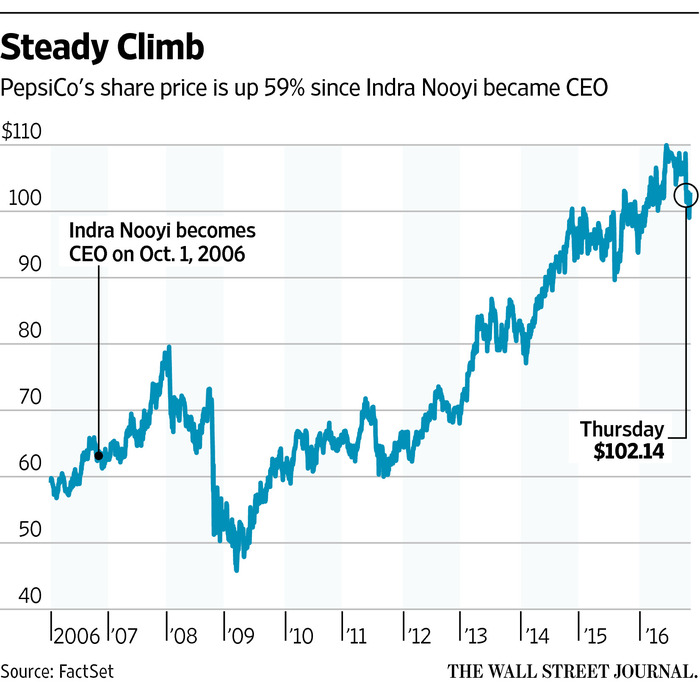 PepsiCo was forced to recalibrate. In the spring of 2011, the cover of its annual report featured Lay’s, Doritos, Pepsi and Mountain Dew, replacing more-nutritious brands that had been spotlighted in previous years. Ms. Nooyi stopped talking so much about healthy products as she increased marketing for the big core brands.

PepsiCo has continued to boost R&D spending, reaching $754 million in 2015, up from $344 million in 2006. The company also says about 9% of sales comes from innovation. It is unclear how much of that derives from items like fruit and fiber bars and how much from digital-age tweaks to traditional brands like Ruffles Ultimate, a potato chip with a deeper ridge and superior crunch produced by applying “bending stress’’ and “blade tip geometry’’ using 3-D printing technology.

Coming up with healthy new products can be slow and difficult going, according to many of the more than two dozen former PepsiCo R&D, sales and marketing executives interviewed for this article.

For starters, taste trumps everything. Sproutzels, a pretzel made from nutrient-rich sprouted whole grains, seemed like a good idea. The company tested it in Costco stores about 2½ years ago but Costco dropped it after sales underwhelmed. A former PepsiCo manager who worked on the project described the taste as grassy, grainy and gritty. PepsiCo says Sam’s Club currently stocks the product.

“I don’t know too many consumers who compromise on taste for something that’s more nutritious,’’ says Gregory Yep, PepsiCo’s senior vice president of long-term research before leaving the company last December.

PepsiCo’s plants, meanwhile, are geared to churn out mass-volume products delivered directly to store shelves. One round-the-clock Frito-Lay plant in Irving, Texas, takes in 20 tons of potatoes every couple of hours; chips can be produced and sent out to stores in the same day. Quaker’s nonstop mill in Cedar Rapids, Iowa, the largest of its kind in the world, is serviced by 20 railcars carrying 100,000 bushels of raw oats a day.

Any new, low-volume products can slow sales and thin profit margins. Normally, for a new product from a small company, $50 million in sales is a huge success. For a company the size of PepsiCo, with more than $60 billion in revenue, “it’s a distraction,’’ says Jeremy Cage, who was senior vice president of global snacks before leaving PepsiCo in 2012.

Flat Earth, a chip line the company launched in 2007, promised half a serving of fruit or vegetable per ounce. PepsiCo hoped it would generate sales of about $100 million the first year. When sales were closer to $50 million, the brand was deemed a failure and soon discontinued for taking shelf space away from faster-selling chips, say former executives. 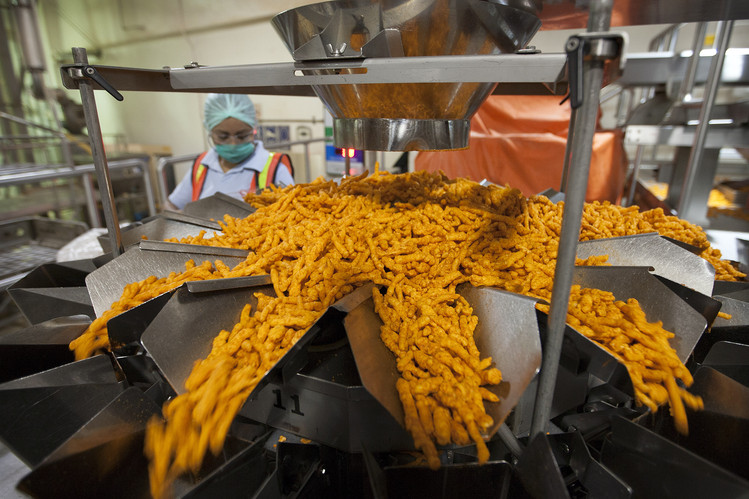 A worker packages Cheetos at a plant in Mexico City, Mexico, in 2012. Photo: Bloomberg

When the company tried to resurrect a vegetable chip a few years later it ran into other challenges. Worried about misleading health claims, PepsiCo wanted the new chip to contain more vegetable content than Hain Celestial Group’s Veggie Straws, say former managers. But adding more vegetables lowered margins, and the project stalled during “stage gate,’’ a series of in-depth reviews from product idea to production that can take one to two years.

PepsiCo says it is introducing a new product next year called Off the Eaten Path Mosaic Veggie Crisps that is made with rice, black beans and green and yellow peas.

Mr. Johnston, the CFO, predicts PepsiCo’s products will “come out on top’’ as retailers winnow the nutritious brands to focus on top sellers. That is because PepsiCo is investing heavily in innovation and can scale up more easily through its highly developed agricultural procurement, says Mr. Johnston, who also expects profit margins of healthier offerings ultimately to be in line with the overall business.

PepsiCo hasn’t been able to find a sugar substitute that will lower calories and wow consumers. Stevia, a zero-calorie natural sweetener, leaves a bitter aftertaste. When PepsiCo tried to fix Diet Pepsi last year by swapping aspartame for sucralose, another artificial sweetener, the sales plunge accelerated. This fall, the company reversed course and brought back Diet Pepsi with aspartame.

Mr. Khan says the company is getting better at combining sweeteners to replicate the taste of full-calorie versions. “It’s like cooking in your kitchen. It’s not one ingredient,’’ he says, adding PepsiCo has cut calories in many developed markets but that consumers in countries like China and India have been tougher to win over.

Absent a magic bullet, the company is chipping away at calorie counts in its beverages one by one, country by country, ingredient by ingredient. Mr. Khan says PepsiCo plans to expand distribution of reformulated 7UP and Mirinda sodas with 30% fewer calories to dozens of countries over the next 18 months.

PepsiCo has made more headway with sodium, cutting it by 12% per serving since 2006 after developing “designer salt’’ crystals shaped to deliver the same taste at lower concentrations. The company was among the first to remove trans fats from its snacks more than a decade ago, but it has cut saturated fat by 3% since 2006, versus its earlier goal of 15% by 2020. The company plans to roll out chips that are baked instead of fried in 25 more markets over the next 18 months.

It’s a delicate balance. “As long as we’re delivering our [profit and revenue] guidance, I think we have the latitude to execute this transformation,’’ says Mr. Johnston.